The teacher in me loves a chalkboard.  Steve was saying he wanted a whiteboard to hang in the kitchen for list making.  The boy loves his lists.  I told him instead we should look for a chalkboard, since they’re all the rage right now.  I happened to be in Marshalls on Sunday and found a chalkboard that goes perfectly in our kitchen.  It has a white shabby-chic frame around it.  Total score!  Instead of lists, I decided to use this for messages.  I absolutely adore quotes, sayings, song lyrics…anything inspiring really. I have a whole collection of them on Pinterest.  Chances are whatever I’m feeling or have going on in my life, someone has already been through it and probably already wrote about it/said it better than I ever could.

“Derek says it’s always good to end a paper with a quote. He says someone else has already said it best. So if you can’t top it, steal from them and go out strong.” – American History X

See, right there’s a perfect example.  I plan on changing the message weekly.  I ordered these chalk markers which are much neater than having all that chalk dust around and easier to write with.

So I guess we’ll have to figure something else out for Steve’s lists. 🙂

All you need is love, 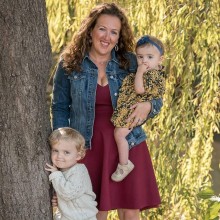 I just completed our second baby's nursery.  My son's nursery had a nautical theme.  This time the nursery doesn't have a specific theme per say , it's more of a certain … END_OF_DOCUMENT_TOKEN_TO_BE_REPLACED

We recently remodeled the basement and created a space for a playroom for our son and daughter who will be arriving in June.  I had looked at different pictures of … END_OF_DOCUMENT_TOKEN_TO_BE_REPLACED

Our basement was partially finished when we moved in.  The other half of the basement had a laundry area, a storage area, and a workshop.   Right after we … END_OF_DOCUMENT_TOKEN_TO_BE_REPLACED